This is a common chronic, inflammatory condition of the eyelid margins of varying severity. It can be associated with certain skin disorders such as seborrhoeic dermatitis, acne rosacea and eczema.

There are two main types of blepharitis, which regularly co-exist:

Chronic low grade inflammation often associated with staphylococcal bacteria and characterised by tiny crusts or flakes at the root of the eyelashes, which can often be visualised using a pen torch light. 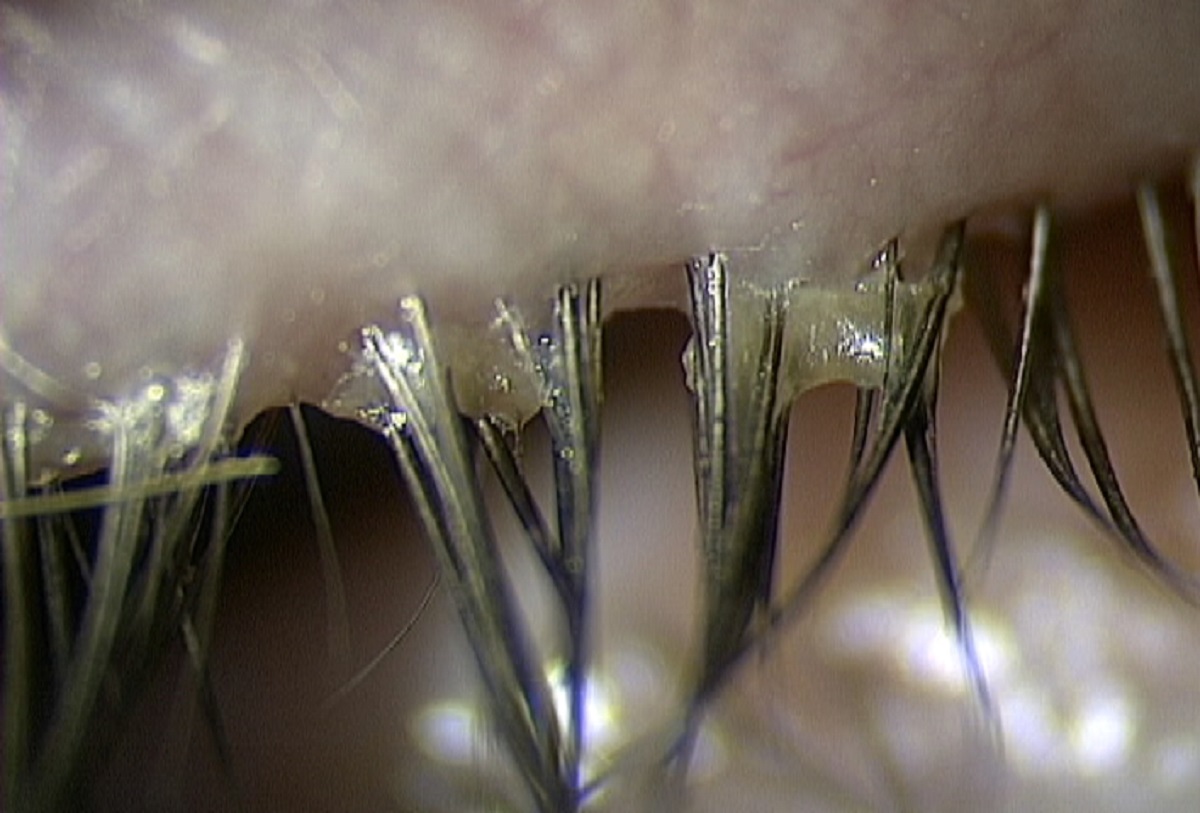 Anterior blepharitis: Magnified view of the upper eyelid with prominent crusting at the base of the eyelashes.

Inflammation and blockage of the oily gland openings, located just behind the eyelashes; also known as meibomian gland dysfunction. This condition causes an unstable tear film (only apparent on slit lamp examination) which “breaks up” too quickly, resulting in reduced ocular surface wetting. 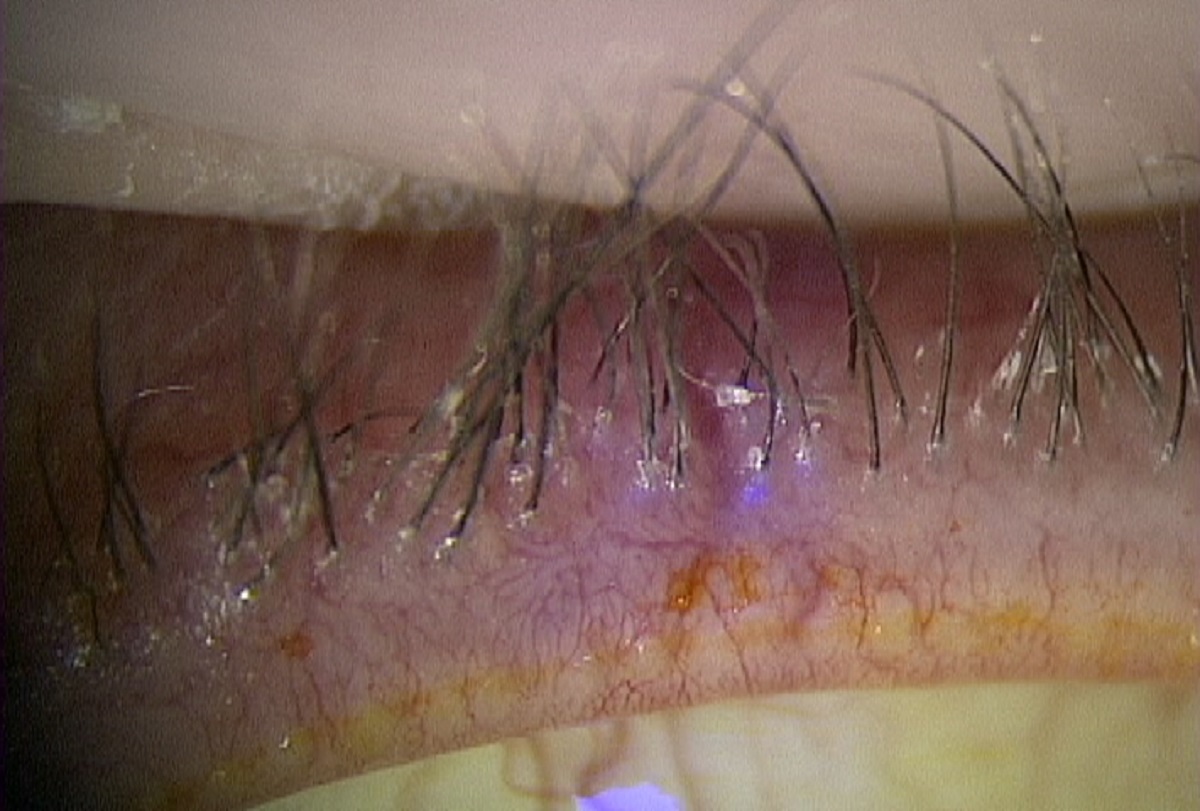 Another important cause of blepharitis, which can often be overlooked, is eyelid Demodex mite infestation. Demodex blepharitis is more likely to be present in individuals with facial rosacea. Demodex folliculorum, which is found in the eyelash follicle, causes anterior blepharitis with typical cylindrical dandruff visible at the root of the lashes. Demodex brevis, which burrows deep into sebaceous and meibomian glands, is associated with posterior blepharitis and can lead to meibomian gland dysfunction and keratoconjunctivitis.

Most patients with blepharitis will have one or more of the following symptoms: 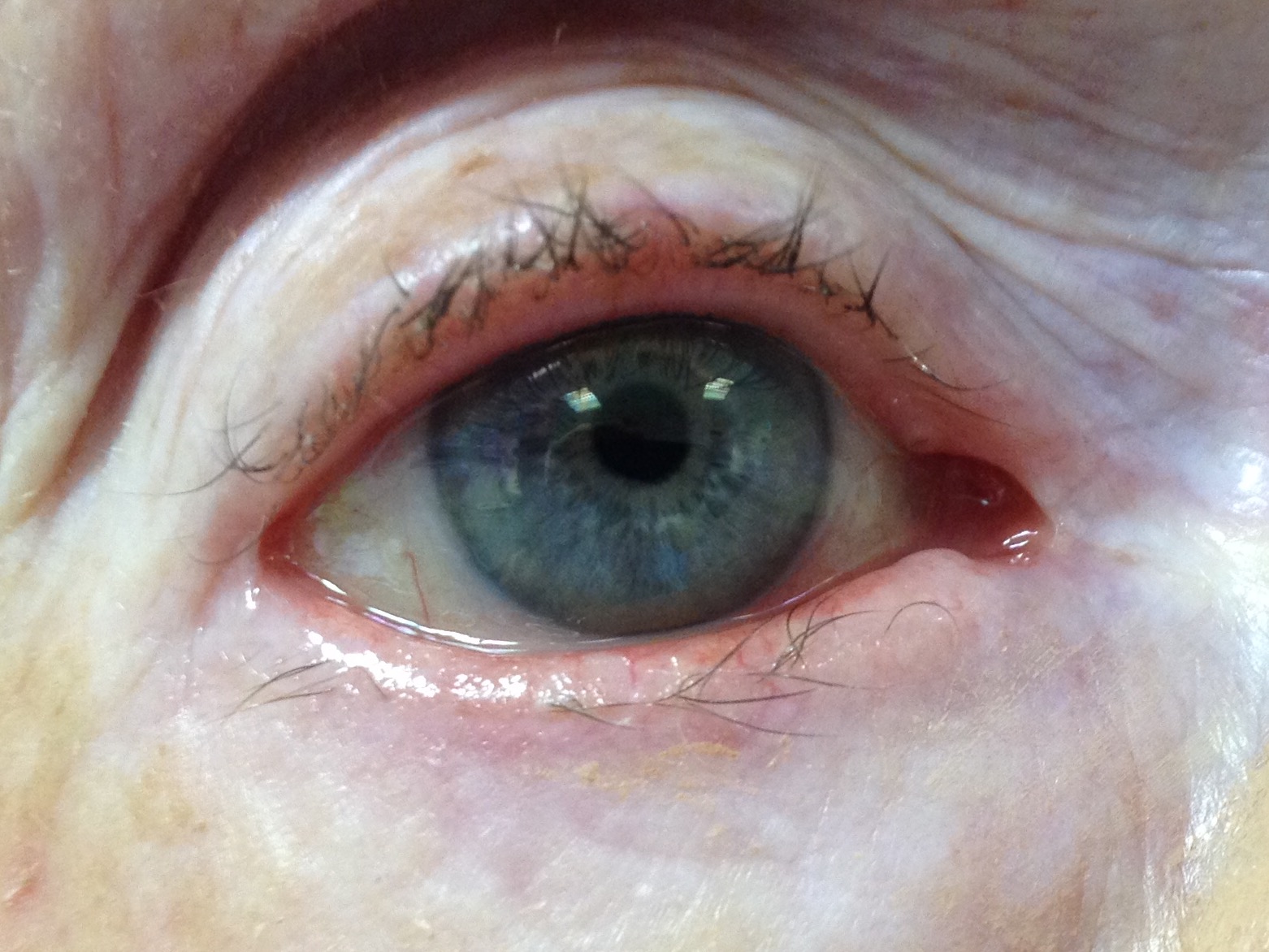 The main treatment for blepharitis from any cause is eyelid hygiene to clean the lid margins. This removes flakes and crusts, reduces the bacterial load and improves meibomian gland function. Lid hygiene involves 3 steps:

Eyelid hygiene initially should be performed every morning and night for several weeks to get the blepharitis under control. Once symptoms improve a maintenance regime of daily cleaning is required to prevent flare ups.

Artificial tear drops eg hypromellose, liquifilm , systane ultra can improve comfort, especially during the early stages of performing eyelid hygiene (which often takes several weeks to take effect). If ocular lubricants are required more than four times a day then it is recommended that a preservative free preparation is used eg celluvisc 0.5% or hylotears. Occasionally topical antibiotic ointments eg fucithalmic or chloramphenicol applied at night for one week, are useful in reducing bacterial load. Steroid ointments eg maxitrol are also often very helpful at treating inflammation in moderate to severe cases but should only be prescribed on the recommendation of a specialist. More rarely, especially for posterior blepharitis, oral antibiotics eg doxycline, for 8-12 weeks can reduce lid inflammation.

Publish modules to the "offcanvs" position.